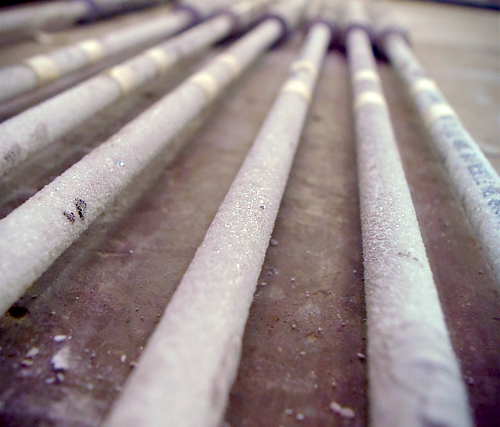 This project will develop more durable and life-extending techniques for concrete infrastructure.

Based on extensive laboratory testing and field application in Toronto, we have developed a technique for the upgrade of concrete columns that reduces and even eliminates the rate and risk of corrosion. Analytical procedure have also been developed to design the upgrade. This procedure has been validated for chloride-induced corrosion in Canada and currently laboratory work is underway at IIT Roorkee to investigate its application in India. For upgrading the structural performance of corroded concrete columns, twenty four full scale specimens are being tested at IIT Roorkee. After establishing a column testing rig similar to the one at the University of Toronto, testing of healthy, corroded and retrofitted columns began in April, 2016. A demonstration project on this topic is planned in Gujrat.

For the new structures, we have tested 30 full-scale columns in Toronto under simulated seismic loads in which glass FRP bars, ties and spirals were used as internal reinforcement. The test program on columns will be completed in about four weeks following which the analytical techniques to simulate structural behavior and procedure for their structural design will be developed. Discussions are underway with Indian partners to initiate a demonstration project in this area as well. A GFRP manufacturer has already agreed to work on this project.

In addition, to investigate behavior of slabs reinforced with GFRP bars and headed shear reinforcement, tests on 18 full-scale slab specimens (200 thick) have been completed and the analytical work is in progress. Two other related studies are also underway in Toronto in which the behavior of FRP under extreme temperatures and sustained loads is being investigated. These two studies are scheduled to be completed in the next six months.

A common thread in the field of infrastructure in India and Canada is the deterioration of reinforced concrete structures, in most cases, caused by corrosion of reinforcing steel. While strength reduction of these structures is a major concern, deterioration of their ability to deform under load and absorb energy generated by major events such as earthquakes, blasts and other impact loads can be catastrophic. It is therefore important to determine the post-corrosion performance of deteriorated structures and develop innovative strengthening and life extension techniques for these structures when needed. A parallel effort is also needed to design new structures with the aim of eliminating corrosion.

One of the solutions is to replace black steel with non-corroding reinforcement. Stainless steel is one option but high cost prohibits its common use. A more feasible solution is the use of non-metallic reinforcement such as fibre reinforced polymers, FRP. For the retrofit of existing structures, FRP wraps and near-surface mounted FRP strips can be used as external reinforcement. For new structures, FRP bars offer a great opportunity.

The proposed research thus focuses on developing durable and more economical structural concepts and innovative life extension techniques with the goal of creating sustainable and robust infrastructure. The project will include testing of corroded confined concrete columns and FRP-reinforced concrete columns under extreme actions such as simulated seismic loading. The project should conclude with the development of life cycle design procedures. The outcome of the project shall be implemented in real life structures in India and Canada.