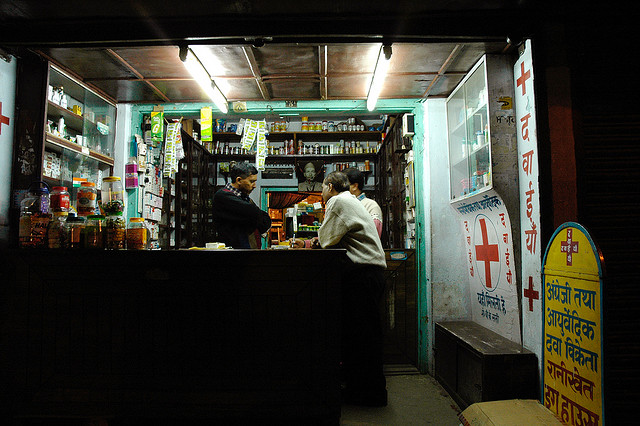 This project engages community pharmacists in India in order to improve early detection of and provide effective treatment for tuberculosis.

A situation analysis was conducted in Sept. 2015 to finalize the intervention protocol, obtain institutional ethics approvals, and train study staff. Stage 1 and Stage 2 pharmacy providers were recruited, educated and trained to engage in the intervention in Dec. 2015 and Feb. 2016, respectively. Results from the first 3 months of the project implementation (Dec. 2015 – March 2016) at 60 pharmacies are promising. Of 325 CXR referrals initiated by the pharmacy providers, 271 (83%) were completed, and 144 (53%) were found to be abnormal. Of 152 doctor referrals initiated by pharmacy providers, 146 (96%) were completed, 60 (41%) were referred for sputum and/or GeneXpert testing, and 45 TB cases were notified, all of which initiated treatment. Seven (15%) TB patients had microbiological confirmation. The median duration of TB symptoms among notified patients was 30 days (IQ 21-90), and time from pharmacy contact to treatment initiation was 6 days (IQ 2-14). Focus groups with Stage 1 pharmacy providers found the intervention to be highly acceptable. The intervention was perceived to improve their credibility and trust with patients in the community. Identified challenges included high consumer demand for over-the-counter medicines, patient loss to follow-up after CXR referral, and high pharmacist workload.

India bears the world’s highest burden of tuberculosis (TB), and accounts for a third of the “missing 3 million cases” that remain undiagnosed. Diagnostic delays, averaging 2 months, contribute to high morbidity and mortality, and increased community transmission. Pharmacies are the first point of contact for many undiagnosed patients, and serve as optimum entry-points to screening services. Engaging pharmacy providers could help shorten the diagnostic pathway for

TB and enhance early case detection. This study is a collaborative research partnership between McGill University, Canada, and World Health Partners (WHP), India. We are piloting an intervention that engages community-based pharmacists and utilizes e-health technology to achieve early TB case detection. We are recruiting 105 pharmacies, under a step-wedge design (Stages 1-3), in 3 blocs of Patna city. Our objectives are to: (1) educate and engage pharmacy providers in early TB case detection via training, incentives, and e-health messaging; (2) promote chemist referral of adult TB symptomatic patients for a chest radiograph (CXR) and/or doctor consultation using an ICT platform; and (3) evaluate intervention effectiveness and acceptability using mixed methods. We believe this intervention will be effective, feasible and acceptable, and serve as a pilot for broader expansion. The study is relevant to India, where novel initiatives are urgently needed to mitigate the impact of TB, and in Canada, where TB remains a major health problem in the Aboriginal population.