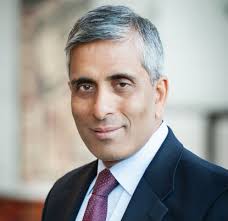 Professor Arvind Gupta was named the 13th President and Vice-Chancellor of the University of British Columbia on March 12, 2014. A professor of Computer Science at UBC since 2009, he is a well-regarded expert in research and innovation policy with a proven record of accomplishment in building meaningful research collaborations.

Professor Gupta has spoken frequently on research and innovation policy across Canada with public, private and academic audiences. He is a regular contributor to the national dialogue through opinion editorials on international collaboration and recruitment, competitiveness, innovation, and productivity.

From 2000 to 2014, he was the CEO and Scientific Director of Mitacs, a national Canadian not-for-profit research organization dedicated to developing the next generation of innovators with vital scientific and business skills in partnership with academia, companies, and government.

Since 2012, Professor Gupta has been a member of the Government of Canada’s Science, Technology and Innovation Council (STIC) an advisory body that provides external policy advice on science and technology issues and produces regular national reports measuring Canada’s science and technology performance against international standards of excellence.

In 2010, he was appointed to the six-member Jenkin’s expert panel to review federal government support to industrial research and development. The recommendations from this report have had a significant impact on federal innovation policy.

Professor Gupta obtained a PhD from the University of Toronto in 1991. His research expertise is in the field of combinational algorithms with applications to fields such as bioinformatics, which utilizes computer science to understand genetics. He has co-authored over 80 peer-reviewed publications and supervised 30 graduate students and post-doctoral fellows.